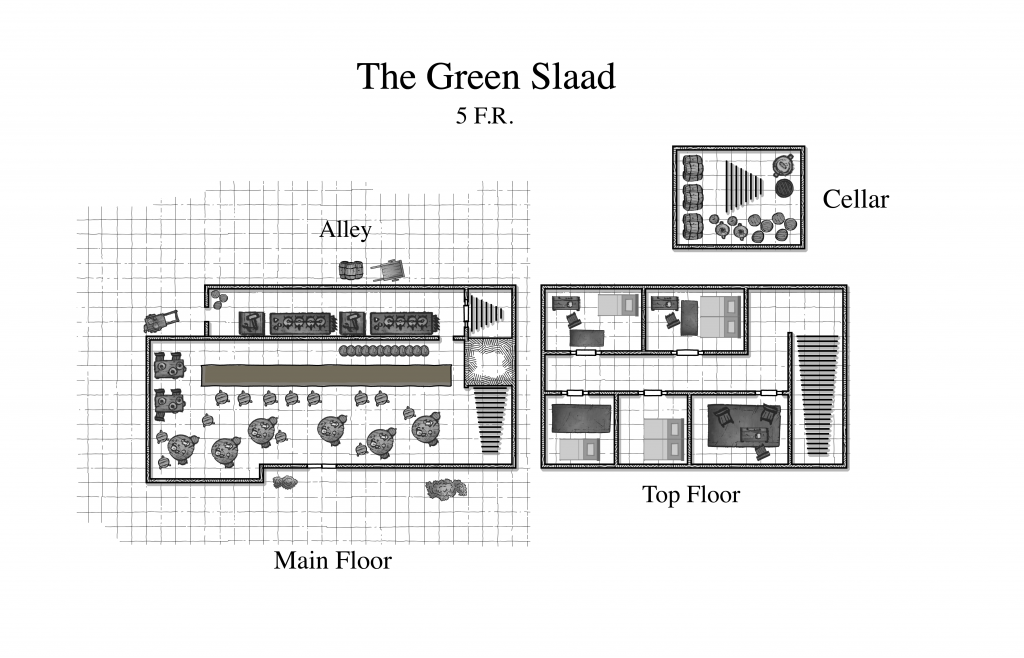 An enormous, meaty paw reaches down and pulls open the heavy ironbound door you were just shouldering aside. The half-ogre bouncer greets you with a cheery wave.

At each end of the room, a stone hearth blazes warmly. A low, thin haze of pipe smoke fills the air. That’s normal enough.

Most of the tables look like they’ve been to war. The chairs sit unevenly on a wood floor covered with suspiciously anatomical dents and scars. Also normal.

There’s the standard murmur of conversation, punctuated by an occasional shout from a small knot of customers. Looks like there’s a game going on.

Then things get a little weird.

You stumble, nearly reeling back out the door as a nine-foot-tall green slaad gathers itself to rend you limb from limb. It looms over a gleaming oak bar that’s the only decent piece of furniture in the place. Behind the bar is a bipedal hippopotamus, taking orders while she rumbles about the mating habits of guard drakes.

Just as you realize the slaad is stuffed, the host drifts over: A beholder wearing a framed monocle, tray perched precariously on two bent eyestalks, towel draped over another. A voice echoes in your head: “Sit anyweah, deah. Be right with ya.”

Too stunned to flee, you numbly grab a table and plant your butt firmly in a chair. An ale arrives a moment later. You take a hefty swig. You’re gonna need it.

Welcome to The Green Slaad.

The Green Slaad is the largest tavern in Hull Ward (and the only inn, unless you count the Wink & Kiss). It’s tough but friendly, and one of a handful of places outsiders can safely visit in The Ward. Weirdness aside, here’s what it looks like:

At any time, you may find some or all of these folk visiting the inn:

The bar is now owned by Armak Rockfist, defacto leader of Marta’s Marauders for a short time after Marta died. The team disbanded shortly thereafter. He’s content to remain behind the scenes, and his ownership is the worst-kept secret in the city of Aventine. A cursory look at the inn’s finances would immediately show that Blong is funneling money to “Gravelthumb.” That’s Armak’s best attempt at subterfuge. He spends a lot of time at the Slaad, smoking his pipe and keeping an eye on things.

Artemis Hasp is a Gnome tinkerer wizard. Once part of Marta’s Marauders, he’s a regular at the Green Slaad. He enjoys everyone’s company, trades stories with Blong and occasionally glances nervously at the stuffed Slaad behind the bar. His prize possession is a Strongarm automaton named Crunch. His favorite game is to have Crunch sit at a table with its larger arm out of view. He challenges passersby to an arm wrestling match with Crunch. When they sit down, Crunch reveals its larger arm. The construct rarely loses.

Blong Hrusto is the Giff manager and bartender of the Green Slaad. Given the chance, she will tell long, detailed stories of various events she’s witnessed, sometimes relevant to the conversation, sometimes not. Blong owns an inn nearby in Oar’s Rest, but moved to the big city to expand. She is saving up to buy a new bar, but would prefer find a loophole in her contract that lets her take ownership of the Green Slaad. Armak knows what Blong is up to, but finds the steadfast Giff charming and thinks he might someday sell to her. Most people assume Blong owns the tavern. She does nothing to dispel the notion. Neither does Armak. Blong keeps a musket under the bar at all times.

Gargra was the Green Slaad whose body is now perched behind the bar. Armak’s share from the sale of her skull gem paid for the inn.

Roxlycheh is an immature Beholder. Early in life they lost most of their eyestalks and abilities in a catastrophic explosion (caused by a gnome in their lab – a whole other story they’ll tell you, if you ask). They now go by “Roxy,” and enjoys the simpler life as the host and server at the Green Slaad. Towels and trays carried on their remaining stalks, they greet all visitors. Roxy wears a single ornate “glass” over their main eye. That glass prevents their anti-magic cone from working. However, if a fight breaks out, they remove the glass and use the anti-magic cone to stop any violence.

Thud is the half-ogre bouncer at the Green Slaad. She’s not a true combatant, but she’s happy to wade into a fight if necessary, which it rarely is.

Fast Eights. A game where players control tiny carts drawn by simple automata created by Artemis Hasp (they won’t work if removed from the course). The automata run around a figure-eight course. Players control the speed of the automata using a small two-button wand. Go too slow and lose. Too fast and you crash off the course. Players roll DEX, WIS or INT ability checks to control by skill, intuition, or insight. Each roll is a contest. First player to get four successes wins.

No, I don’t have hard-and-fast rules for this game. It’s magical slot cars. Just relax and go with it.

Before –5 FR, the bar was owned and operated as The Leaning Leg by Tasha Quann. At that time, she was a fast-rising member in the crime syndicates of House Belos.

In –5, she assumed leadership of the House. She sold the bar to Armak Rockfist, who renamed it the Green Slaad and turned management over to a Belos Lieutenant named Panovar Flynt. Flynt ended up being a less-than-competent manager. He lost his job in 1 FR to Team Spear after they dealt with a rash of assaults by the escaped zoo of Egethar Sleg.

Armak Rockfist purchased the bar with his share of the sale of Gargak’s control gem. See Marta’s Marauders for more information.

Every 4th of Leaffall, Oriana Valtova, Artemis Hasp, Armak Rockfist and Angus Bloodstone meet at the bar. They raise a tankard to Marta, who Armak refers to as “That glorious bitch.”

How To Use It

I created The Green Slaad for a years-long Dungeons & Dragons campaign. It uses a homebrew calendar and world. Feel free to move it to any system or setting. I won’t mind.