Hull Ward is the oldest neighborhood in Aventine. The first city walls were built using stone quarried in Dirion, far up the Ibril. Once the stones arrived, the workers used the upturned hulls of the great river barges to build their homes. Soon, shops and taverns sprang up around them, and Hull Ward was born. 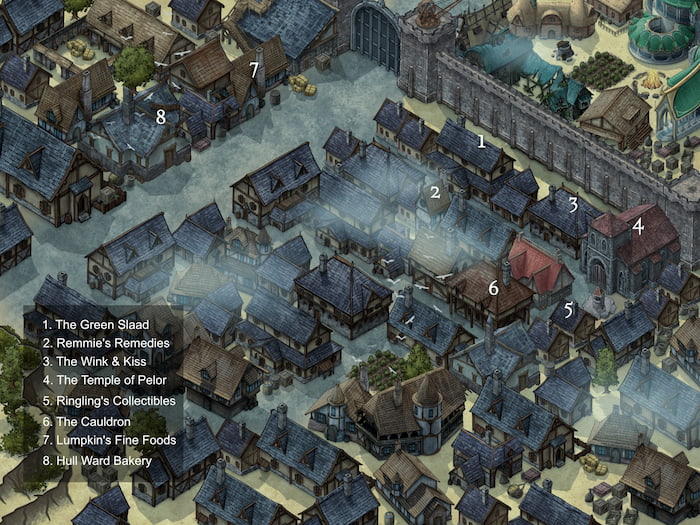 Hull Ward boasts a thriving economy, thanks to its location just inside the Eastern Gate. Residents include craftsmen and merchants, as well as several establishments designed to extract coin from the wealthy Aventinians who venture into the neighborhood for a bit of fun.

It is somewhat safe during the day, less so at night. Petty crime is kept to a minimum by House Belos.

Hull Ward is home to The Green Slaad, as well as:

The Flagrant Farce. A playhouse offering comedies, tragedies, and musical performances of all kinds. Owned by Lucretia Borova.

Renney’s Remedies. Famous purveyor of potions and salves for every need.

Temple of Pelor. Recently set up by Venkat, who is trying to bring the light of knowledge to Hull Ward. Looked on with tolerance by residents.

Ringling’s Collectibles. Ringling’s sells magic items, scrolls and non-magical stuffs. There is a 5% chance that anything in the shop was stolen. Run by Marceline, a tall, wispy half-elf nerd.

The Cauldron. A pitfighting arena. Now owned by Panovar Flynt, who’s itching to get back The Green Slaad.

Lumpkin’s Fine Foods. Lumpkin is a rotund halfling and entrepreneur who runs Lumpkin’s Meats. Recently, he’s expanded to Hull Ward, opening Lumpkin’s Fine Foods. Just inside the Eastern Gate, he hopes to sell his hearty, tasty delights to hungry travelers and departing citizens alike. He’s assisted by his two nephews, Gerold and Heribert. They’re not much, but they try.

Hull Ward Bakery. Next door to Lumpkin’s, the owner is a gruff half-orc named Hadigak. He’s partnered up with Lumpkin to market a new food: Meat between two slices of bread. They don’t have a name for it. He’s assisted by a small gaggle of goblins of which he’s fiercely protective.